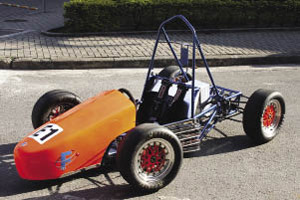 The FEI single seater is fueled by 1.4 thousand batteries of the kind used in mobile phonesFEI

Initiatives from all over the world have led to an increase in the use of electric cars. Brazil has just witnessed the birth of the first electric racing car. It travels over 100 kilometers an hour on the 200 volts contained in 1.4 thousand mobile phone lithium ion phone batteries. The car was designed by mechanical engineering students at the University Center of the Fundação Educacional Inaciana Foundation (FEI), located in the city of São Bernardo do Campo, in the Greater São Paulo. The project was coordinated by Professor Roberto Bock. The car is a single-seater that can run for 30 minutes on charged batteries. Recharging them takes four hours. The vehicle is 2.7 meters long and weighs up to 320 kilos, driver included. SAE Brasil, an entity that brings together engineers, technicians and executives from the automotive, marine and airspace industries, collaborated with the development of the car, together with the WEG Motors and Magneti Marelli companies. The association has recently announced that it will hold a race in 2012 for this category of vehicles. Undergraduate and graduate engineering students from Brazilian and foreign institutions of higher education can participate in the event. In Denmark, one more step has been taken toward increasing the popularity of electric cars. Better Place, a US company, plans to open 20 service stations that will automatically replace the batteries of the electric cars in two minutes. The driver can use a GPS to locate the nearest service station. Replacing the batteries will cost R$ 316 to R$ 571 a month, depending on the number of kilometers the car covered during this time.

This work first appeared on Pesquisa FAPESP under a CC-BY-NC-ND 4.0 license. Read the original here.

Zana Lewis
Auto Insurance Agent
Once responsible for identifying sales opportunities for insurance plans and overseeing a portfolio of clients, Zana now devotes her product knowledge in sharing more helpful information that educates our readers better when it comes to anything automotive, especially coverages.